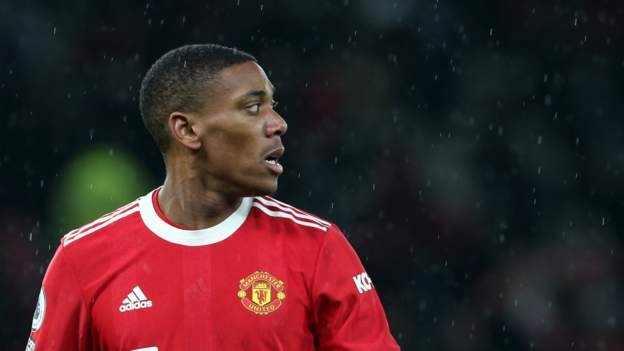 Anthony Martial is contracted to Manchester United until 2024

Martial, 26, has already told Rangnick he wants to leave United this month.

Sevilla are keen on the France forward but have been unable to match his wages or offer the loan fee United want.

Martial has not started a Premier League game since 2 October and has not featured at all since the 3-2 win against Arsenal on 2 December.

He has not been selected for recent squads.

However, with injuries, Africa Nations Cup absences and Covid absentees meaning he only had six outfield substitutes for the game at Villa Park, Rangnick asked Martial if he wanted to be involved. The answer was negative.

"He didn't want to be in the squad," said Rangnick.

"He would have been in the squad normally but he didn't want to and that was the reason why he didn't travel with us yesterday."

Martial has scored 56 goals in 173 Premier League appearances for United. The club's refusal to sanction his sale in summer 2018 was one of the triggers for a downturn in relations with Jose Mourinho that eventually led to the Portuguese's departure from the club.

In January 2019, under Ole Gunnar Solskjaer, the forward signed a new contract that runs to 2024.