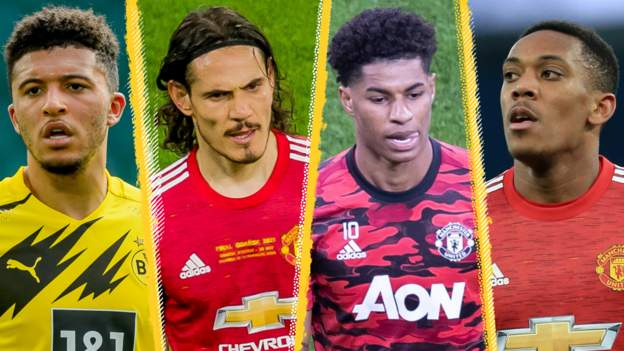 Where will Sancho fit in among Manchester United's attacking options?

One of Europe's longest-running transfer sagas has finally reached its conclusion, with Jadon Sancho completing a £73m move from Borussia Dortmund to Manchester United.

After the German side rebuffed their attempts to sign him last summer, United's gaze did not shift.

Instead of signing an alternative, they chose to wait another 12 months to complete the deal and United clearly view Sancho as the ideal fit to improve their squad.

So where exactly could he slot into this United team? The 21-year-old's time at Dortmund, and Ole Gunnar Solskjaer's approach at Old Trafford, could offer some clues.

It was evident from Sancho's first season at Dortmund - after arriving from Manchester City in 2017 - that his incredibly-mature decision-making in the final third separated him from other teenage attacking talents.

A combination of injuries and the Bundesliga outfit drip-feeding him minutes, meant he only started seven games in his first campaign, but his figures have flourished since then, averaging a goal or assist every 83 minutes last season.

Sancho has been successfully deployed in both wide right and left roles - predominantly in a 4-2-3-1 system - during the four seasons at Dortmund.

Interestingly, his scoring rate is significantly higher when playing on the left wing, often owing to the fact he can cut inside onto his stronger right foot.

Sancho may not be lightning quick, but the intelligence of his movement infield and runs in behind defences from wide left areas, combined with his excellent close-control dribbling, regularly gets him into goalscoring positions.

Sancho - goals on left wing v right wingStarting positionMinutesGoalsMinutes per goalxG per 90 minutesRight wing5,265242190.26Left wing3,099201550.43Stats from all competitions, aside from xG per 90 which is league only. xG = expected goals from quality of chances presented.

Sancho's game as a right winger is naturally more focused towards functioning as a creator, by playing on the flank of his stronger foot.

The England international generally makes more vertical runs in wider areas than when he's playing on the left.

Once again, his well-timed movement allows him to exploit gaps in behind opposition left-backs and his dribbling ability means he can escape covering centre-backs who subsequently get dragged out wide.

Rather than simply whipping crosses into areas, Sancho is more likely to try to pick out team-mates with cut-backs or balls into the box.

With the wing-backs providing the width in the system, he has learnt to drift into more central zones to create chances, particularly to utilise the blistering speed of Haaland's runs in behind defences.

Sancho made 82 passes into the penalty area in the Bundesliga last season - the highest in the division and 13 clear of anyone else, despite only starting 24 games because of injury.

A delicate chipped assist to find Haaland's burst in last season's Champions League last-16 first-leg against Sevilla showed he can create against deeper defences - and not just the higher lines often seen in Germany's domestic competitions.

So, how can United make the most of Sancho's strengths?

A problem area in Solskjaer's 4-2-3-1 system has been the identity of their right winger.

Mason Greenwood, Marcus Rashford, Daniel James, Juan Mata and Paul Pogba have all played in that role, with none nailing down a regular spot there.

Often, there is an imbalance with the location of United's forays forward. Last season they constructed the joint second-lowest percentage of attacks down the right side, while having the third highest percentage down the left.

In November's loss to Istanbul Basaksehir, Anthony Martial (9) and Marcus Rashford (10) had an almost identical average position in a left-central area, with Juan Mata (8) deeper and narrower on the right - 45% of United's attacks went down the left side and just 27% down the right side

Rashford, Martial and even Pogba are all players who prefer attacking from the left side.

Sancho's ability to function effectively on the right wing will prove invaluable.

United's forwards and Bruno Fernandes, with his runs into the box from a number 10 role, are likely to benefit from the quality crosses and cut-backs that Sancho will provide from that side.

Deploying him there should also free up Greenwood to gain more experience in his natural position as a central striker, especially given the 34-year-old Edinson Cavani's playing load could need careful management - after he only started 13 Premier League games last season.

Could this be Solskjaer's best forward combination?

However, with Rashford possibly ruled out for about 12 weeks if he undergoes surgery for a shoulder problem, Sancho could deputise on the left wing at the start of the campaign.

With Luke Shaw overlapping down that side, it could enhance Sancho's scoring threat by creating more space for him to cut inside.

And the former Watford youngster has displayed an ability to dovetail with fast-raiding full-backs, linking well with Achraf Hakimi and Raphael Guerreiro for 18 goals during his Dortmund career.

Sancho's arrival provides an immediate solution to United's right-wing dilemma, allows Solskjaer more flexibility in how to best use his other attacking players and, at 21, the club could have secured a player who will be a key fixture in their frontline for many years to come.

Get news and features about your favourite team direct to your phone with the BBC Sport App's Premier League club news notifications, along with line-ups, latest scores and results. Download the App here: Appleexternal-link - Androidexternal-link - Amazon.external-linkNotifications, Live Guide, social media and more with BBC Sport