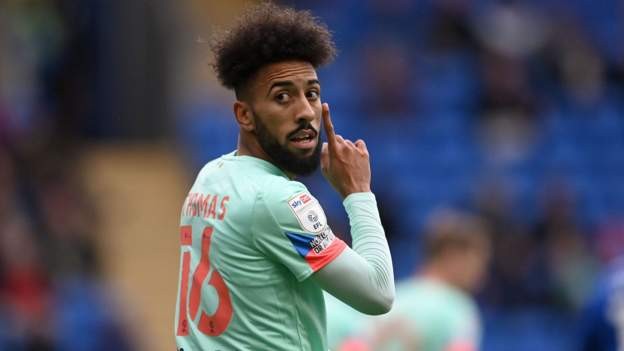 If Sorba Thomas can help Huddersfield beat Nottingham Forest in Sunday's Championship play-off final, he will have capped a remarkable rise from non-league to Premier League in 16 months.

The winger, 23, joined the Terriers from Boreham Wood in January 2021.

Since then he has also made his debut for Wales and faces another huge play-off for a World Cup place on 5 June.

"It sounds amazing. Those are two dreams that could come together in the space of a week," Thomas said.

"It would be amazing. To do it with the country that I love. It would be an amazing moment in my career and I don't think anything will really top that.

"[Promotion would be] everything. A life for myself, future family, fingers crossed. My mum is going to be there. It would just be amazing."

It is through his Newport-born mother, Gail, that Thomas owes his allegiance to Wales - although on Sunday his concentration will be fully on Huddersfield's bid to join the riches of the Premier League, and he will be glad to be out on the pitch rather than sharing the nerves with her.

"I am just happy I am not in the lounge with her. I just think give her a vodka and she will be all right!" he joked.

It is a far cry from his formative football years, when a 16-year-old Thomas joined Boreham Wood after being released from West Ham United.

"For me, that was the first time I'd been told I wasn't good enough and it was hard, it hit me very deep," Thomas said.

"But like I say to any youngster, when you have the right circle around you of mates and family, it helped massively and they got me back on the horse. Thankfully they did because I wouldn't be where I am if it wasn't for them.

"I threw my boots in the bin but people got me back to playing and I went straight to [buy another] pair."

Thomas enrolled in Boreham Wood's sports education programme, took a bricklaying course at college, and worked in a sporting goods store and then as a scaffolder to make ends meet.

Even though he has done it the hard way, he believes it has made him a stronger player and person - name-checking the likes of inspirations Jamie Vardy, Michail Antonio and Tyrone Mings as others who have worked their way up from non-league to the very top.

"When I first went to Boreham Wood, I was working at JD in Oxford Circus so I was there for a year," Thomas said.

"I did not like that at all - you get all different types of customers and in your head you are thinking, 'I really need to make it as a footballer, I can't do this every week'.

"Then I went into scaffolding... I thought here was cold, but when you've done scaffolding at six o'clock in the morning it's freezing. I did not enjoy that at all, that was another one where I thought I need to make it as a footballer.

"I felt like going to non-league and being in that environment of working in JD, working in scaffolding, there are young players that won't experience those moments.

"I would never take back anything I've done in a way of doing those types of jobs and going down the route that I've gone. I feel like being around that environment helped me grow as a person and helped me moving up here to doing things individually by myself.

"Being able to work, even when you can't do any more, you can't hold any more poles, you've got to fit one more on. It helped massively. I feel like my drive has come through those cold days of scaffolding.

"When you go there they don't care if you play football, they will just throw another pole on you.

"When you see the success stories of Jamie Vardy, Antonio, Mings, that came from non-league to playing in the Premier League, you always believe that your time will come.

"Huddersfield took the risk of taking me from there and I am repaying them by hopefully putting them in the Premier League."

Thomas was signed by Huddersfield for the B team but after half a season finding his feet and an impressive pre-season, he had convinced Terriers manager Carlos Corberan he deserved a shot at the first team.

"At the start when they told me you will be announced as a B team signing, I was thinking 'what?' Thomas admitted.

"But that helped me massively as there was no real pressure. I feel like if I'd come in straight in the first team the pressure might have got too much and it might be too early.

"With the B team it helped me gradually get used to the nutrition side, to the gym. Everything around it helped massively. Hopefully through the academy and the B team, they see there is a route to the first team."

Thomas has repaid Corberan's faith with three goals and 14 assists in all competitions this season, earning himself a new long-term contract in the process that ties him to the club until at least 2026.

"They had faith in me. Not many clubs take a player straight from non-league to the Championship," Thomas said. "I wanted to repay that faith with my performances. It's just one more game and we can turn a dream into a reality."

His performances also caught the eye of Wales manager Robert Page, who handed Thomas his international debut as a substitute in last October's World Cup qualifying 2-2 draw with the Czech Republic, followed by a full 90 minutes against Estonia.

Wales have not reached a World Cup finals since 1958, yet just a week after Huddersfield's Premier League bid Thomas could be involved in another huge play-off final when Wales host either Scotland or Ukraine at Cardiff City Stadium for a place in Qatar.

"It has been a long time since we were at a World Cup. For me, last year, if you told me I could possibly play at a World Cup the following year I would have bitten your hand off. it's amazing," he said.

"It's only things that you see in movies and I am living a movie right now.

"My mum is massive to me. She's everything. For her to see her son playing for her country is amazing. I just want to repay that in the way of why not take her to the World Cup.

"We've got the players to do it, we've got the main man Gareth Bale there. Anything is possible."

At Boreham Wood, the suggestion of Thomas lining up alongside Bale - once the world's most expensive player when Real Madrid paid Tottenham £85m in September 2013 - would have been laughable.

Yet just a year and a half later, the pair could link up to send Wales to the World Cup.

"I played a little cameo with him against Czech Republic. We have loads of chats. We have little debates about football. It is amazing how humble he is," Thomas added.

"There are not many people who are probably like him. People who have been there and done it, they could just not talk to you, but he will sit on the table with us youngsters and have a full-on conversation.

"You see a different side to him when you are there. He is a legend at Madrid, a legend in the Premier League. I am just learning from him."

Thomas' learning curve has been steep and rapid, and his journey is only gathering pace ahead of the biggest footballing week of his life.