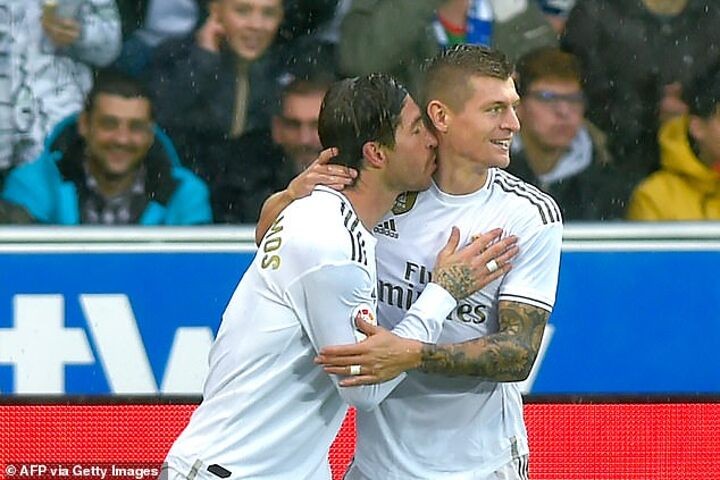 Toni Kroos has admitted his surprise at the departure of Sergio Ramos after the Spaniard's 15-year spell at Real Madrid ended earlier this month.

Ramos, who is fourth on Real Madrid's all-time appearances list with 671, claimed at his Bernabeu farewell tribute that by the time he had decided to accept a new one-year contract on reduced terms, the deal had been taken off the table.

Kroos joined Real in 2014 from Bayern Munich and told his Einfach mal Luppen podcast: 'I do not know Real Madrid without Ramos. It was inconceivable that he was not going to finish his career at Madrid. I expected him to stay.

'He is not only a first-rate player, but also the best captain I have ever seen because he always fought for the team on and off the field.

'If you ask 100 rival forwards which defender they least liked playing against, Ramos' name will be mentioned quite often. It was good to have him on our team.

'I am sure we will see him at Real Madrid again, whatever his role. It would also be negligent not to have someone like that at the club and keep him. He can still contribute a lot in the future.'

Ramos and Kroos won three Champions Leagues and two LaLiga titles during their seven years together.

Ramos has not yet decided where he should go next, with Paris Saint-Germain reported to have made initial contact with the 35-year-old.

New Real boss Carlo Ancelotti now has a job on his hands to convince Raphael Varane to stay, with the Frenchman's contract up next summer as Manchester United and PSG keep tabs on the centre back.

For a rundown of the highs and lows of Ramos' illustrious career with Los Blancos, click here.