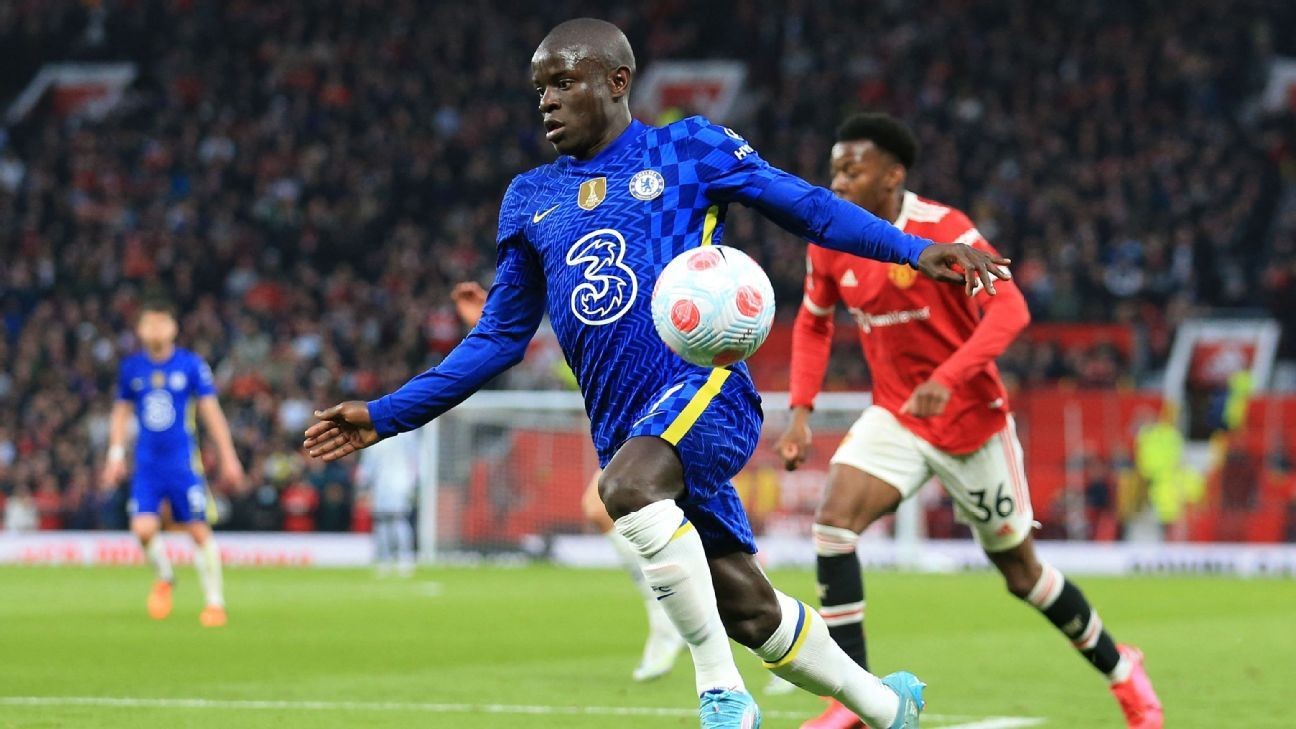 Manchester United are interested in signing N'Golo Kante from Chelsea, according to the Guardian.

Midfielder Kante's contract expires next year and with United keen to strengthen their midfield this summer, new boss Erik ten Haag will test Chelsea see if they're willing to negotiate.

Kante remains a key player for Thomas Tuchel however, and the German boss has made no secret of wanting to continue working with the 31-year-old World Cup winner.

Kante has experienced injury problems this season, which could be one reason the Blues might consider letting him leave. Tuchel has admitted his frustration at not always having Kante available due to injuries, but it would be a brave move for new Blues owner Todd Boehly to allow such a quality player join a major rival.

- Barcelona's ability to lure striker Robert Lewandowski to Camp Nou is edging closer, according to Sport, who believe the announcement hinges on whether Bayern Munich can sign Sadio Mane from Liverpool. Sport believes Mane will leave Liverpool after the Champions League final and head to Bayern in a move worth €30 million. Once that's confirmed, Bayern won't stand in Lewandowski's way, and the Polish 33-year-old is believed to have already agreed a deal with Barcelona.

- Leicester City are interested in Manchester United midfielder James Garner, according to the Mirror. The Foxes have been impressed by Garner's loan spell at Nottingham Forest, the 21-year-old playing a key part in helping Forest reach Sunday's Championship play-off final, and knocking Leicester out of the FA Cup. Garner's long-term future is unclear, and as well as Leicester, both Leeds United and Southampton are also monitoring the situation.

- Villarreal are hoping to make Giovani Lo Celso's loan move to Spain a permanent one, but Tottenham Hotspur are asking for a fee of €20m, according to Fabrizio Romano. The Italian journalist says that Unai Emery is desperate to keep the Argentine midfielder who was so impressive this season as Villarreal reached the Champions League semifinal. It's clear that Lo Celso doesn't appear to be in Spurs boss Antonio Conte's plans.

- West Ham United and Southampton are battling it out with Ajax Amsterdam for FC Salzburg striker Junior Adamu, according to the Daily Mail. The Austrian international, 20, who has also been targeted by Hertha Berlin and Red Bull Leipzig, has been valued at around £12m. Adamu can play as a winger or striker and he's scored nine goals this season, including one against Bayern Munich in the Champions League. Quick and skilful, he is contracted until 2025.

- Tottenham look to have succeeded in their quest to bring Internazionale's Ivan Perisic to London, according to Fabrizio Romano. The Italian journalist says a two-year deal has been agreed between the two clubs, with a medical due to take place early next week before everything is signed and sealed. Antonio Conte had made the 33-year-old Inter midfielder a top priority, and his arrival could be key to Conte extending his stay as manager at the Tottenham Hotspur Stadium.

- New Burnley boss Vincent Kompany is keen to be reunited with Taylor Harwood-Bellis, according to the Sun. The former Manchester City skipper took the 21-year-old defender to Anderlecht on loan, and now he wants to make him a permanent addition at Turf Moor. Kompany is hoping his relationship with his former club will help facilitate the move, but he faces competition from Celtic and Brentford. Harwood-Bellis is believed to have recently brought a home in Cheshire, which could boost Burnley's chances.