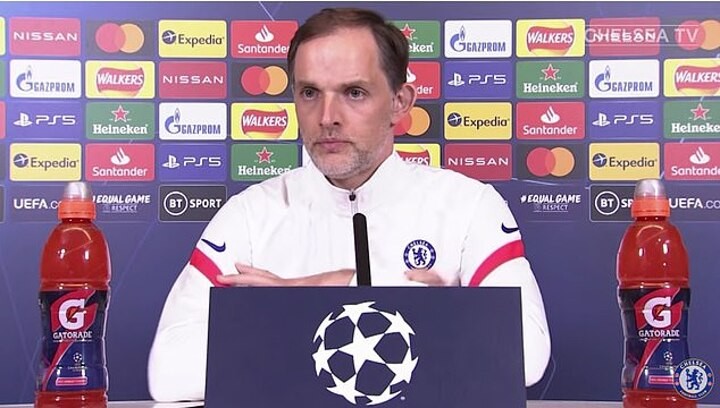 Thomas Tuchel has insisted Chelsea will go for the jugular against Real Madrid on Wednesday night, despite having a vital away goal in their Champions League semi-final.

Christian Pulisic's first-half strike in Madrid last week has the Blues in pole position and a home win or goalless draw will guarantee their progress to the final.

However, their first-leg advantage has led to debate over whether Tuchel will go for victory or try to defend their away goal and hope Real do not score one of their own.

But, speaking ahead of the second leg at Stamford Bridge on Wednesday, Tuchel insisted Chelsea will be going out to win the game and seal their place in the Istanbul final in emphatic style.

'For me the challenge is to forget the result in two-legged games and go on and start new at 0-0,' the German said.

'We will clear prepare to win the match, nothing else. I don't know any other way to prepare other than to encourage my team to go out and try to win it.

'If we are at our best then it's a non-brainer that we go for the win. We want to win games, this club is about winning.

'This game and competition is about winning. We are in the semi-final second leg.

'The first result is not as important as everybody thinks. There is zero importance for me in the preparation of this match.

'It's not changed anything about how we've prepared, zero influence. We will encourage them, we will demand from them and we will be strong tomorrow as a group and one club with one goal to overcome Real Madrid.

'This will only happen if we bring our best level to the pitch and the best level means we try to win it.'

Real could be boosted by the return of captain Sergio Ramos after he watched on from the stands in the first leg.

Ramos, who was doing individual ball work in training on Sunday, has been out for over a month with a calf problem.

He took part in full training on Monday and has travelled to London with Zidane's squad, which would be a huge boost for the Spanish side.

Tuchel admits he expects Ramos to start the second leg but demanded his side don't 'lose our heads' over his inclusion.

He added: 'The main lesson is we can trust ourselves and have the right to be in the semi-finals.

'We should be self-confident, have absolutely no fear to face this challenge because we deserve to be there and can perform at that level again. This is the main lesson.

'Does Ramos play or not? This is a tough question because i don't know if he's fit or not. We'll see after training and when they give the line-up.

'Does it change for Real Madrid? Yes it changes them a lot. He's the captain of the most successful team in Europe in recent years.

'It changes a lot but we cannot lose our heads about this decision. I think that he will start, we will prepare for that and we have to make sure he can't do it alone.'