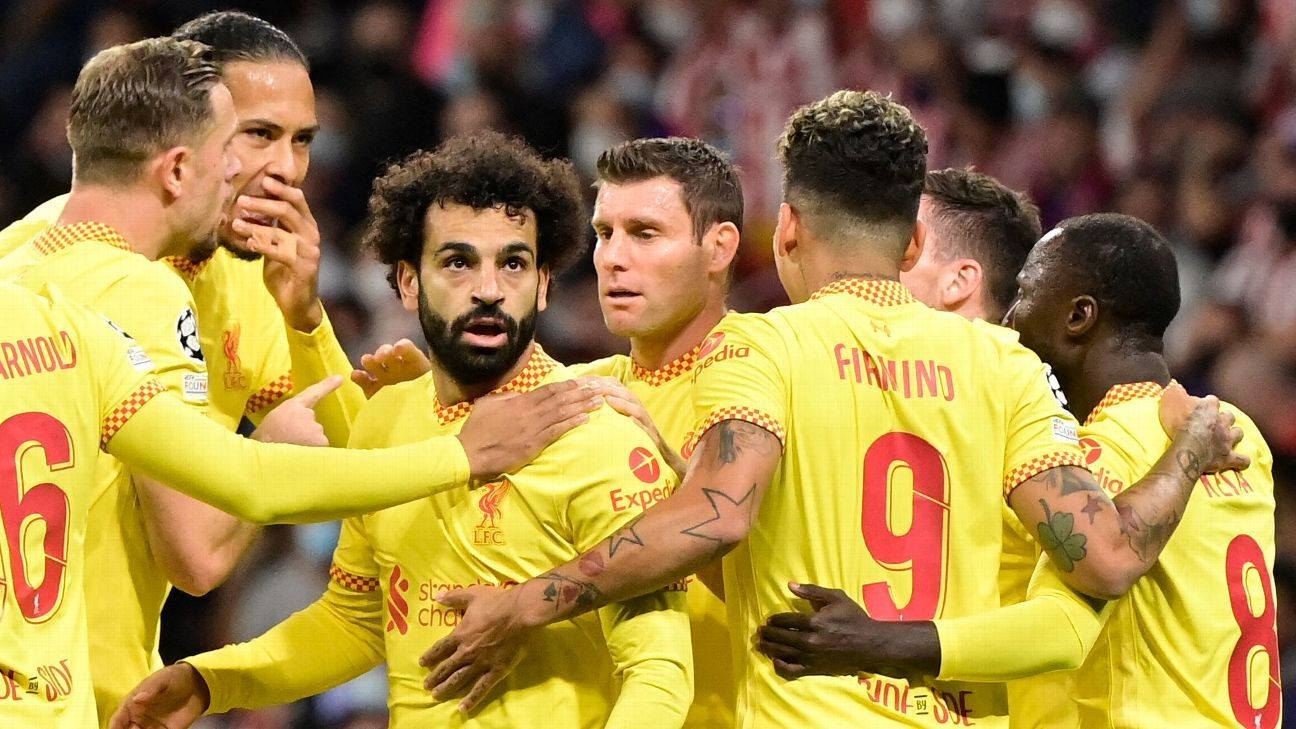 Matchday 3 of the Champions League group stage has been and gone and there is plenty to discuss, from important wins for Barcelona and Real Madrid ahead of ElClasico, to an epic Manchester United comeback and struggles for several German teams.

What caught your attention on Matchday 3?

Dawson: Liverpool's 3-2 win over Atletico Madrid was fantastic entertainment and put a dent in the argument that the Champions League group stages are dull. To go to the champions of Spain and win was a huge statement from Liverpool and they should be considered one of the favourites to lift the trophy.

Kirkland: There were other eye-catching results for Spanish teams -- Real Madrid's 5-0 demolition of Shakhtar, Villarreal's 4-1 win at Young Boys -- but yes, it's hard to avoid Atletico's perplexing loss to Liverpool. What do you make of a game where Atletico were dreadful for 20 minutes, unplayable for a long spell after that, and finally undone by a red card and a penalty? It was simultaneously encouraging and disappointing, and it feels like we're still no closer to finding out exactly what they're capable of this season.

Rae: As someone who focuses heavily on the Bundesliga, this was a bitterly disappointing midweek for German clubs. (Thank goodness for Bayern Munich, whose opener in the 4-0 win at Benfica from man-of-the-match Leroy Sane evoked Arjen Robben memories.)

I expected a hard game for Dortmund at Ajax, but could not have foreseen such an emphatic 4-0 clobbering. Meanwhile, Leipzig had good phases in the 3-2 defeat at Paris Saint-Germain, but were undone by individual mistakes from which Tyler Adams and Mohamed Simakan must learn. Wolfsburg under Mark van Bommel are just a mess; after being outplayed by a youthful, vibrant Salzburg for a 3-1 defeat, they have gone seven without a win in all competitions.

Real Madrid and Barcelona won; which of the two gives you more optimism?

Kirkland: In terms of being Champions League contenders: neither. Madrid are stronger right now, but they're still way off the likes of Bayern, Man City, Chelsea or Liverpool. The defence is significantly weaker without Sergio Ramos and Raphael Varane, and Carlo Ancelotti doesn't feel like a coach for a rebuild.

Ronald Koeman's Barcelona, meanwhile, are a zombie team: lurching on with a coach who should have been sacked by now, and would have been if an affordable replacement had been available. Barca's kids are very exciting, but it's much too soon to hope they can bring European success in the short term.

Rae: In the short term, Madrid have the greater upside. The squad is more seasoned and deeper, while the attack, with Karim Benzema playing some of his best football for years, is better than what Barca can muster. Meanwhile, Vinicius Jr.'s development is fascinating to watch and there is just a firmer base about Real.

But Barcelona might be a very different proposition in the coming years. The shoots of recovery are visible, especially with teenagers Gavi, Pedri and a fit-again Ansu Fati. Barca are behind their rivals in most areas, but the La Masia academy represents the club's biggest source of hope.

Dawson: Both are teams in transition but Real Madrid seem to be dealing with it far better than Barcelona. In Benzema they have got one of the best strikers in the world and they have the benefit of Ancelotti, who has seen it all before. This is not a vintage Madrid side by any stretch but they will fancy their chances of being in the hunt for trophies at the end of the season. Barcelona, meanwhile, look like they're in survival mode and Koeman will be lucky to survive the season, never mind lift any silverware.

play1:20Benzema: El Clasico the best match in the world even without Messi

Karim Benzema explains why he believes El Clasico is the best match in club football.

What do you think about technology use in the Champions League?

Rae: I do not see a huge difference regarding VAR use and that is probably not a surprise, given the leagues I cover most closely -- Bundesliga and LaLiga -- do not deviate much, if at all, from UEFA standards. England may be different.

What I would say is that hand signals after VAR decisions could do with work from some UEFA refs. For example, Romania's Ovidiu Hategan managed to fool many a commentator and fan on the first disallowed Bayern goal against Benfica by apparently pointing to the centre spot. His signal for second disallowed goal was not significantly clearer!

Dawson: The implementation of VAR in the Premier League was bumpy to say the least but, in general, it has been a lot smoother this season. Purely from a spectator's view, it has not seemed as streamlined in the Champions League this season. Fans don't like delays to a game which should be free-flowing and the quicker VAR decisions are reached, the better for everyone.

Kirkland: There's been endless VAR talk in Spain recently, with frustration over Kylian Mbappe's winning goal for France in the UEFA Nations League final. There was frustration here too at the role VAR played on Tuesday in denying Atletico a penalty and chance for an equaliser for Diogo Jota's challenge on Jose Maria Gimenez and how long the decision took, regardless of the merits. Overall though, the way VAR is used in Europe feels faster, more transparent and less intrusive than it does in LaLiga.

play1:09Marcotti: Ronaldo proves again why Man United brought him in

What is the best Champions League goal you have seen live?

Dawson: Nothing will top the drama of Ole Gunnar Solskjaer's winner against Bayern Munich in the 1999 final but the atmosphere inside Old Trafford after Cristiano Ronaldo scored the winner in injury time against Villarreal on Sept. 29 was a moment to make the hairs on your neck stand up. Fans have been locked out of stadiums for too long because of the COVID-19 pandemic and a lot of pent up emotion seemed to come flooding out when Ronaldo's shot hit the net.

FC Barcelona vs. Real Madrid -- arguably the greatest rivalry in international soccer -- is back on Sunday, Oct. 24, at 10:15 a.m. ET. Sign up now to stream ElClásico on ESPN+

Kirkland: So many to choose from. Gabriel Batistuta's rocket for Fiorentina at Wembley in October 1999 was special and Thierry Henry's solo run at the Bernabeu in 2006 is hard to beat, given the circumstances. The other that has always stuck in my mind was Lionel Messi's first against Arsenal in March 2011. What he did -- scooping the ball over hapless goalkeeper Manuel Almunia before finishing -- was so good that you couldn't tell what he'd done in real time. (The replays on the big screens at Camp Nou were greeted by awed 'oooohs' from the crowd).

Rae: I was not in Glasgow for Zinedine Zidane's masterpiece in the 2002 final, so will go for a final goal I did see in the flesh. It is a strange one in some ways but I picked it because Messi says it is one of his all-time favourites and that is good enough for me.

The image of it stays in my mind to this day: With Barcelona 1-0 up in the 2009 final against Manchester United in Rome, Xavi's superb ball was whipped in from the right and the 5-foot-7 superstar, then 22, jumped as high as I have ever seen him jump, before flinging himself at the ball, which looped over the helpless Edwin van der Sar to effectively settle the game. Pure Messi magic.