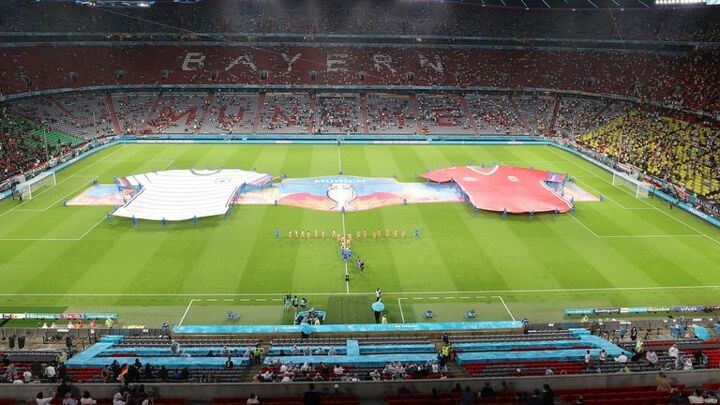 UEFA has confirmed it is investigating potential discriminatory incidents that occurred during Germany’s 2-2 draw with Hungary at the Allianz stadium.

Leon Goretzka's late equaliser rescued a Euro 2020 last-16 place for the Germans and eliminated Hungary from the tournament in a dramatic final night in Group F.

A UEFA statement read: "In accordance with Article 31(4) of the UEFA Disciplinary Regulations, a UEFA Ethics and Disciplinary Inspector has been appointed to conduct a disciplinary investigation regarding potential discriminatory incidents which occurred in the Football Arena Munich, during the UEFA EURO 2020 group stage match between the national teams of Germany and Hungary (2-2) played on 23 June 2021."

It means Hungary are now being investigated as part of incidents in all three of their group games, following games against Portugal and France.

A homophobic banner was seen in the stands during the opening game defeat to Portugal while monkey chants were also heard during Hungary's draw with France with both games being played at the Puskas Arena in Budapest.

A pitch invader carrying a rainbow flag was also tackled ahead of the pre-match anthems between Germany and Hungary on Wednesday evening.

The supporter entered the pitch wearing a Germany shirt and brandished the flag during the Hungarian national anthem.

They attempted to run towards the Hungary players before stewards rushed towards them and tackled them.

The protest came after UEFA turned down a request from the mayor of Munich for the city's stadium to be lit up in rainbow colours ahead of the game in protest at Hungarian anti-LGBTQ legislation.

Formula One driver Sebastian Vettel has criticised UEFA for the refusal to allow Munich's stadium to be lit in rainbow colours for Germany's Euro 2020 match against Hungary.

UEFA declined the request, it would go against the fact the European football governing body is a politically and religiously neutral organisation.

"I think to excuse it that it is a political message is the wrong path," he said ahead of the Styrian Grand Prix at Austria's Red Bull Ring.

"I think it is definitely not harming anybody and I think it is a great message that they would have loved to send out and were not allowed.

"Some institutions need to rethink their approach on banning this type of messages."

Kick It Out reporting racism

Kick It Out is football's equality and inclusion organisation - working throughout the football, educational and community sectors to challenge discrimination, encourage inclusive practices and campaign for positive change.