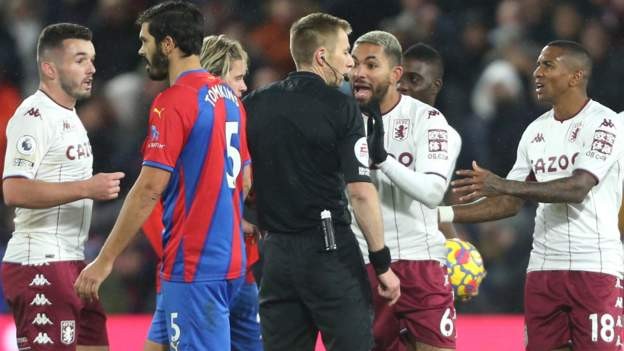 Aston Villa and Crystal Palace have been charged with misconduct by the Football Association for incidents during Saturday's Premier League game.

The clubs have until Monday to respond to the allegation of failing to ensure their players conducted themselves in an orderly fashion.

Both sets of players were unhappy with decisions made by referee Michael Salisbury in the 54th and 55th minutes.

Steven Gerrard's side won the game 2-1 at Selhurst Park.

The Palace players surrounded the official when he blew for a foul by Villa midfielder Marvelous Nakamba on Wilfried Zaha because they felt he should have played the advantage with Christian Benteke in possession for the home team.

Nakamba was booked for the foul and from the resulting free-kick Villa won possession and broke clear only for Palace midfielder Luka Milivojevic to bring down Ollie Watkins on the edge of the penalty area.

Both sets of players surrounded the referee again, with Milivojevic shown a yellow card.

Go to the Crystal Palace pageGo to the Aston Villa page