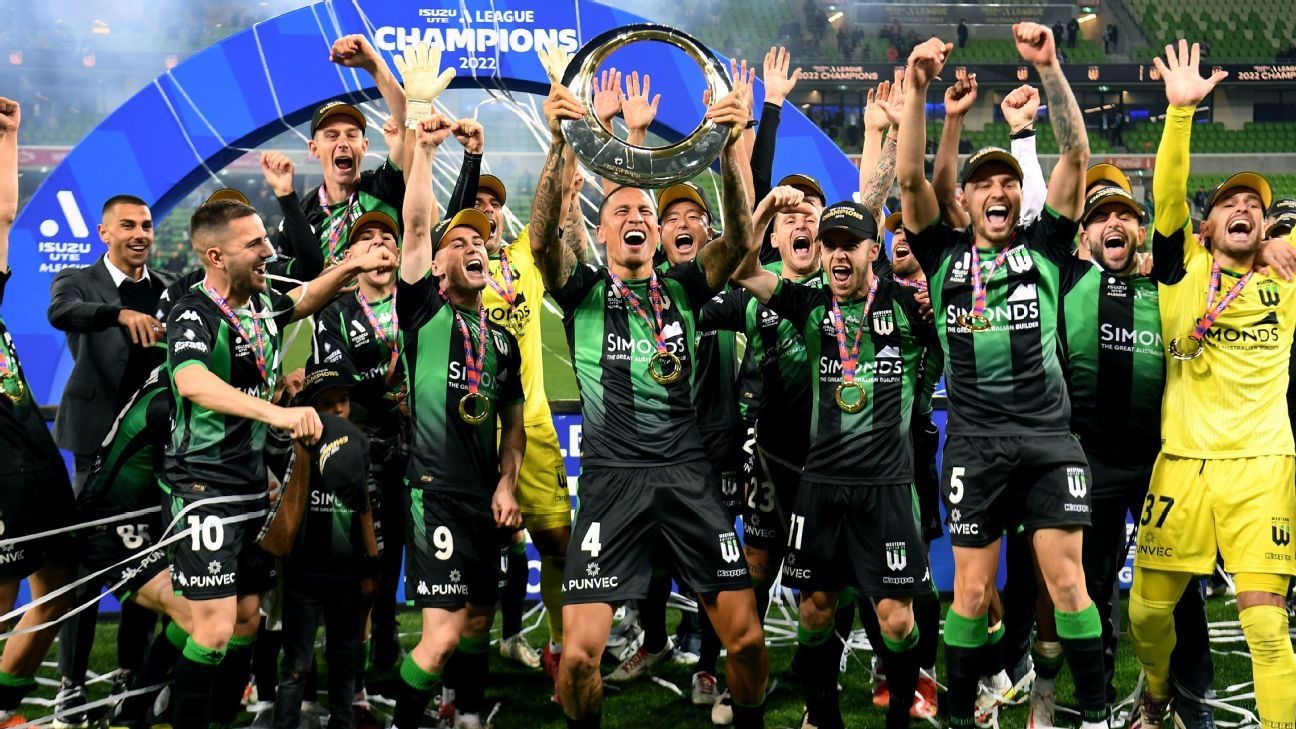 MELBOURNE, Australia -- Western United are the champions of the A-League Men for 2021-22 after beating Melbourne City in the Grand Final. How superbly fitting for a season defined by chaos, unpredictability, and best-laid plans being torn asunder.

In what has to be regarded as a significant upset, coach John Aloisi's side stunned defending champions and two-time defending premiers City 2-0 at AAMI Park on Saturday. An unfortunate own goal from Nuno Reis and a strike from Aleksander Prijovic led to United being crowned kings of Australian football in just the third year of their existence.

In doing so, they became just the second expansion side ever to lift the ALM trophy and the quickest to achieve the feat -- previous record-holder City took 11 seasons, and a City Football Group takeover, to reach the mark. They are the first team since 2011's Brisbane Roar to triumph in their first grand final appearance and they join 2017-18's Melbourne Victory as the only side to win the competition after finishing outside the top two.

"Where the club has come from and you know we've talked about last year, a lot of people were talking about last year how it wasn't a great year for the club," Aloisi said postmatch. "It's only three seasons old and to be able to do what we did tonight and from the beginning of the season... It's amazing.

"It was an amazing feeling, amazing night. I am so happy for the football club as a whole."

Indeed, it must be made abundantly clear: United were not supposed to do this. After finishing third-bottom of the competition and replacing foundation coach Mark Rudan with Aloisi during the offseason, the preseason consensus was that they would finish closer to the wooden spoon than the finals, let alone challenge for silverware.

Western United upset the odds by beating Melbourne City to become A-League Men champions in only their third season of existence. WILLIAM WEST/AFP via Getty Images

Holistically, this team has become universally derided across Australian football for a failure to as yet deliver on the promises it made during the expansion process -- mostly surrounding their commitment to build a privately funded stadium in Melbourne's west -- to the point that a significant number of opposing fans openly pine for them to cease to exist.

"Not even tonight they were tipping us. $5 [the oddsmakers] were giving us!" Alosi said with a laugh. "If I could bet, which I'm not a betting man but if I could bet I would've put so much money on that. They must've lost a s---load of money on that!"

This mentality, this revelling in upsetting the applecart, is perhaps why United's win, in a way, is so perfect. Because from the start of this campaign through to its conclusion, absolutely nothing has gone according to plan in the Australian top flight. Trumpeted as a brave new era for professional football as it dawned, its opening round endured teething problerms before... well... things just kept going downhill from there. As a combination of the Omicron wave of the COVID-19 pandemic and wild weather swept across the league, 113 of its 226 fixtures were forced to be rescheduled and, at one stage, approximately two thirds of its players were unavailable due to the virus.

Walking into this coming maelstrom three years after he resigned from his post at Roar during the 2018-19 season, Aloisi arrived at United having been unwittingly cast as the face of ALM coaching recycling. Wherever news of his candidacy for a role broke, it was quickly met with groans from the associated club's fanbase. Ahead of the 2020-21 season, a significant cohort of Melbourne Victory fans had openly celebrated when Grant Brebner was appointed over him -- before promptly watching their side finish bottom. Despite his legendary status as a Socceroo icon and one of the best players the country has produced, he had been shunned.

Western United coach John Aloisi had to wait for another shot at an A-League Men job, but now he has his hands on the trophy. Vince Caligiuri/Getty Images

"I was sitting in my hospital bed nearly three years ago [after heart surgery] and it was more, I want to coach. I need to coach because I know I've got a lot more left in me and a lot more to achieve," the United coach reflected after winning the title. "I believe that and I was just waiting for the right opportunity and for someone to give me that opportunity to coach.

"And then once you're in a job it's not about you, it's about the team, the club and about what we're trying to achieve as a club. So yes, it's satisfying on a personal basis, but it's more satisfying because I see all the hard work that goes into a new club."

Aloisi's side, though possessing some high-profile names and proven ALM contributors, did little to excite and attract much fanfare. Yes, they had spent significantly on international signings such as Prijovic and Leo Lacroix but, much like their coach, other figures such as Neil Kilkenny, Nikolai Topor-Stanley and Jamie Young were well-travelled in ALM circles and weren't perceived as being at a level where they could push a team over the top. Much like the club as a whole, they were considered to just be... there. Someone to make up the numbers, someone that wouldn't be missed if they vanished.

Even heading into the finals, with this group having found a formula to grind out games and get results and remaining in contention to win the premiers plate right up until the last day of the season, United were considered to be a tier below City and Victory amongst the final contenders.

But in the semifinals, despite suffering a 1-0 defeat against Victory in the first leg, United found a way to dash the hopes of APL bean-counters, television executives and commissioning editors everywhere by stunning their well-established rivals and setting up a meeting with City. And on the season's final day, with their opponents having openly talked of establishing a dynasty, they did it again. They found a way to win. And on the balance of play, they deserved it -- just as much as City didn't.

Within two minutes they led after Prijovic and Lacroix's combined presence at a corner did enough to discombobulate Reis into putting the ball into his own net. Up the other end, Rostyn Griffiths' deployment alongside Connor Metcalfe was hampering City in attack and it took until the 39th minute for Patrick Kisnorbo's side to create a shot from open play -- and it was their only one of the opening half.

But with four goals and four assists to his name heading into the contest, unanimous Joe Marston Medalist Prijovic proved lethal up the other end. The Serbian took advantage of some good fortune to be played onside by Connor Metcalfe and hammered United's second beyond Tom Glover in the 30th minute.

From then on, United were never losing. The club has made defending leads an art form this season and, with City now chasing the game, they were able to sit back and play to their strengths. Of course, there were some nervous moments. Curtis Good struck the crossbar in the 48th minute, Metcalfe headed over the bar in the 54th, and Leckie was only denied by some desperate defending in the 64th. But ultimately, Saturday's result was the 12th time United had kept a clean sheet this season, the most of any side since Perth Glory's 13 in 2018-19.

Look at what it means to Ryan Scott.

Leading into this week, Jamie Young called him "one of the best people I've ever met in football". #ALeagueMenGF pic.twitter.com/kSQjpKgMh5

Nobody else believed in them, but they did. Each member of the dressing room thought they could win the grand final heading into Saturday. They believed they were going to win the whole thing from the first day of the preseason. Aloisi had them believing in that. Stand-in skipper Josh Risdon pretty effectively summed it up when he declared during the presentations, into a live microphone to a live television audience: "I love youse all. You absolute f---ing legends."

"Aleks will remember the first conversation I had with him was 'I want you to come here because I wanted you to help me and help us win it.' That was our mindset," Aloisi said. "Yes, then after that there's the process and the preparation and the daily work that goes into it but we didn't care what others were saying.

"If we did then, or if any of us did, I don't think we'll be in this position now because you'd be too worried about what people think of you so we were just worried about ourselves, worked hard every day and we got the rewards."

Western United has big plans. Few believe they can achieve them. For a lot of them, that near-mythical promised stadium in Tarneit chief amongst them, they have lost the benefit of the doubt on them. But as the 2021-22 season will now show, Western United is capable of defying expectations.